UK Celebs That Have Tried CBD

Celebrity influencers are the driving force of any market nowadays. Whether it be Instagram influencers, TV personalities, Victoria’s Secret models or movie stars, the public is dying to know the latest trends that their celeb faves are indulging in.

The CBD trend was not actually kick-started by celebrities; the public was enjoying it long before celebs managed to weigh in on the debate. But now, celebs have discovered and are enjoying the CBD movement, using their platforms to speak out about the benefits of CBD.

The industry itself is pretty scary. There is no current regulation keeping consumers safe when they take CBD, and that’s why CBD users are forced to educate themselves on the ins and outs of the industry before they purchase products. Furthermore, many members of the public are put off trying CBD oil because of its association with cannabis. They are unaware that CBD food supplements actually come from hemp – not marijuana – and contain little to no THC.

Celebrities using CBD products is a great way for the industry to push forward. That’s why we have compiled a list of 5 well-known celebs and Brits who have spoken out about their CBD usage. Let’s take a look at who our cannabidiol advocates are…

National treasure Sir Patrick Stewart is known for his starring role in a number of blockbuster movies. He has been making headlines recently, however, for his outspoken nature regarding CBD and cannabis in general.

Stewart was also a vocal supporter of Alfie Dingley, a small boy who was denied his cannabis medication by the UK government. Matters were resolved in the end, probably in part due to Alfie’s array of celebrity supporters, among whom was Patrick Stewart. He actually met with the Dingley family to show his support.

While Sir Patrick Stewart is not using the same CBD food supplements you would be purchasing, it is for certain that he is in support of CBD products.

British-Australian actress Olivia Newton-John is another celeb in support of CBD. In 2018, Newton-John was diagnosed with cancer for the third time in three decades. This tragic diagnosis has driven the Grease actress to try natural remedies and modern medicines.

Once again, Newton-John has turned to cannabis oil. Once again, it should be noted here that she is using cannabis oil, not CBD food supplements. Nevertheless, CBD is one of the active ingredients featured in these oils, so it is quite obvious that the actress supports the use of cannabidiol.

Once again, Newton-John is a California resident. She has said that she is “lucky” to live in a state that allows her to grow her own medical marijuana plants and use cannabis oil to manage the pain she experiences as a result of her cancer.

Perhaps a little less well-known than some of the other names on our list, Eddie Hall has earnt the title of the strongest man on the planet. In 2017, he won the World’s Strongest Man competition; he is the only competitor ever to deadlift 500kg.

His secret appears to be cannabidiol, as Hall has spoken out about his CBD use in interviews. He has stated that CBD is ideal for maintaining general health in wellbeing, which is important for any athlete. As a brand ambassador for CBD Asylum, Eddie is working to bring awareness to CBD and ensure that the public is aware of how safe it is.

While most of the celebs on our list are using cannabis oils which contain CBD, Eddie Hall is one of the few British names championing the use of purely CBD food supplements. He is just one of many athletes switching to cannabidiol supplements. If the world’s strongest man endorses CBD, then it must be good for you!

Popular Friends actress Jennifer Aniston has been very outspoken about her CBD usage. In an interview with US Weekly, Aniston said “CBD helps with pain, stress, and anxiety. It has all the benefits of Marijuana without the high.” She did not state what kind of CBD method she uses, so we aren’t sure whether it is vaping, sublingual tinctures, or even lotions that are helping Aniston with her woes.

Nevertheless, Jennifer Aniston is a very positive advocate for CBD food supplements. She has not yet turned to medicinal cannabis, preferring instead to use this non-psychoactive food supplement to maintain her general health and wellbeing.

Aniston is well-known for her ageless beauty and class – perhaps her secret is CBD skincare? We are yet to confirm this information, but it’s certainly possible!

Love her or loathe her, there is no denying Kim Kardashian’s influence. She is an incredibly influential celebrity in the industry, and what Kim K says goes.

Recently blessed with her fourth child, Kim hosted a CBD-themed baby shower for the newborn! Yep, as unbelievable as it is, the Kardashian sister genuinely hosted a party centred around CBD.

“Anyone that knows me knows I am obsessed with CBD everything!” She wrote in a post to her Instagram story. While celebrities are usually paid to publish product ads on social media, Kim was quick to deny that the post was an advert of any kind – she simply just loves CBD!

Apparently, her favourite brand is Pellequr, a Korean spa in Beverly Hills which sells CBD oils. This brand might be quite upmarket for some of our readers (especially those who live in the UK, far from Beverly Hills!), but it is undeniable that Kim believes firmly in CBD supplements.

It is also very likely that Kim has jumped on the CBD skincare bandwagon. We can’t help but wonder whether she has tried CBD bath bombs yet…

Final Thoughts on Celebrities Who Use CBD

There are plenty of other celebs using CBD who didn’t quite make this list, including the likes of Morgan Freeman, Whoopi Goldberg, and Seth Rogan. The CBD trend is only growing and growing, and now it is being propelled further by celebrities who are just loving this supplement.

Unfortunately, it is hard to find British celebrities speaking out about CBD. Complicated laws in the UK are probably deterring our celebs from speaking out, and those who believe in CBD have probably upped and moved to cannabis-positive states in America.

Nevertheless, it is easy to see that there are plenty of British and American celebrities enjoying CBD. Sure, most of them take it to the extreme and vocalise their opinions on the entire cannabis plant, but this positivity lets us know that they truly care about CBD. 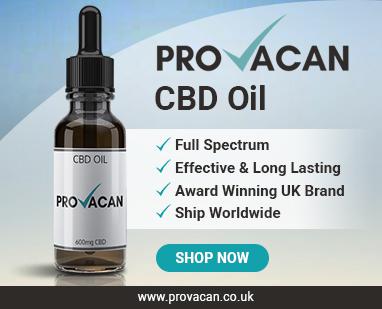 Diamond CBD Review: Who Are They?

It’s always recommended to read reviews on CBD brands before you buy. The cannabidiol market remains unregulated up to now, so consumers have to ...

Trokie CBD is just one of the many brands now available on the CBD market. But as with any other brand, you might want ...

Since the CBD industry is unregulated, it’s essential to do some background research on a brand before you buy it. Research is especially crucial ...

CBD Oil UK: Where to Buy it [Answered]

CBD oil has gone on quite a journey in the UK. According...